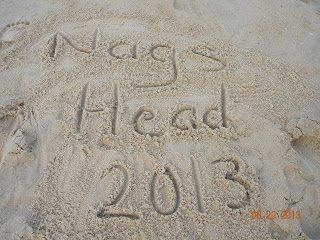 Ok, so I'm exaggerating, a bit.  Our trip to Nags Head was a success.  We had originally planned on leaving around 1 or 2 am.  Of course, plans don't always go as, er, well....planned.  I woke up a bit before 2 and got all my stuff together before waking Erin up to feed her.  Once she was fed and in her car seat, Matt and I woke the girls up and got them in the car.  We pulled out of our driveway a bit before 3 am and headed to my in-laws house to drop off the dog for the week.  We made it to Newtown in a record 35 minutes!  The ride from PA to Nags Head was pretty uneventful.  We drove for a few hours and then stopped somewhere in VA for breakfast.

Five hours later, we were pulling into the driveway of our home for the week...Cloud Nine.  The four other families we were vacationing with were there waiting for us.  Got in the house and within 30 mins, Erin was down for her nap...that's what I call "winning"!  We had a good week. Going to the beach, hanging out at the pool and just hanging around was just what we all needed.  The kids were fairly well behaved.  Erin was the best behaved, in my opinion.  The kids played together well all week. 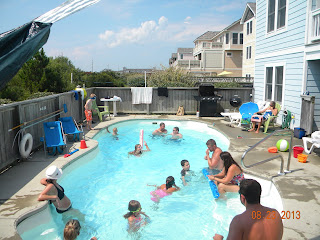 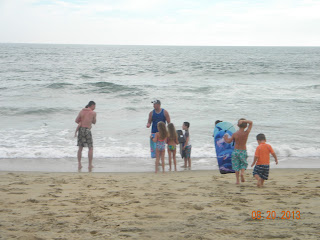 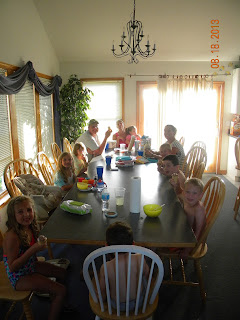 There weren't any major issues either.  I ended up at the Urgent Care on Wednesday cause I pulled a muscle in my back. Note to everyone...do NOT pull a stroller backwards behind you on a beach alone.  Tuesday night my back started to bother me but when I woke up Wednesday morning, I could barely get out of bed. Walking and breathing were an issue too.  I struggled through till after lunch and then I asked my brother-in-law to take me to Urgent Care.  I met with a Dr.Sanchez (his first name was NOT Dirty) and got a prescription for muscle relaxers and Vicodin.  Let me tell you, I do not like the way I felt taking the Vicodin.  I took one as soon as I got it and then took another 5 hours later before bed.  The first one did not bother me but the second one made me feel yucky!  I was trying to feed Erin and get her to bed and I became nauseous and a bit disoriented.  Handed Erin over to Matt and put myself to bed.  Laying awake but not being able to actually move my body freaked me out.  Needless to say, I did not take any more Vicodin.  It's been a week and I still feel the pain in my back but I can walk, breathe and move around so I am better than I was last Wednesday. 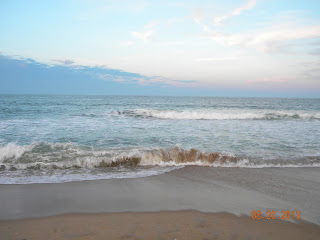 Back to our trip.  I think it's safe to say everyone enjoyed themselves.  There were limited meltdowns, tantrums and fights among the kids...and adults!  The week went way too fast and none of us wanted to leave. Three of the families chose to leave around 4 or 5 am Saturday.  Matt and I and another family decided to hang around for the morning and leave around lunch.   We cleaned the house and left it the way we found it and headed off to get coffee and play mini golf.  We left the island around 10:30 am and pulled into our driveway at 10:30 pm. I thought we were never going to get out of that car! We had to stop for lunch and dinner and then we stayed at my in-laws for a bit to give Erin some time out of her car seat.

All in all, it was a great vacation and we would do it again, in a heartbeat!  Plus, I need to continue my reign as half of the KanJam champs!!! 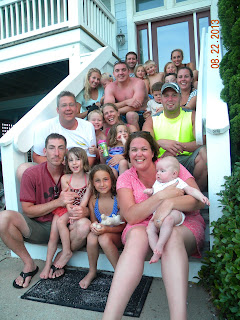 Posted by Jacqueline at 2:39 PM